With so many books already promised for this year it doesn't seem prudent to be starting a new project, but when inspiration strikes!!!

Set in Fuengirola, my own base for much of 2002, and an eventful time. I had just returned to Europe from South Africa and was busy negotiating the terms on a bar and restaurant in Benalmadena, ETA planted a bomb just down the road, and I still clearly remember the blast almost throwing me out of bed.
One lasting impression of the Spanish coast is the moonlit beach at Sohail, and in my mind, it was the perfect setting for this story about a young somnambulist who finds herself caught in the middle of a murder investigation. 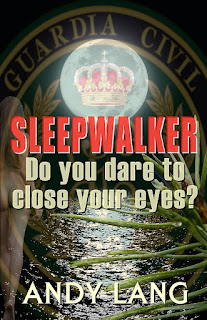 Deborah Grant is a normal, healthy teenager. A girl standing at a crossroads in her young life, and she has a decision to make:
Allow her loving yet domineering father to dictate her future, or.
Strike out on her own, follow her heart and dare to dream?

A long holiday is what she needs, and the Costa del Sol has beckoned. Fuengirola has welcomed the buxom blonde into its sun-drenched embrace.

But the Spanish resort reveals deeply buried desires, desires that she had never dared to dream lived inside her, desires that cause Deborah to rise from her bed in the early hours... and in a trance, she walks.

Disturbing, yet harmless she imagines...
Until the morning that she wakes to a nightmare discovery.
Suddenly, Debbie is terrified to close her eyes!

Sleepwalker, a psychological thriller that will make you wonder just how safe it is to fall asleep!

Amazon, in their usual heavy handed manner have already culled a 5 Star review for Sleepwalker. Quite how they justify these random acts, I don't understand. I have lost several reviews just recently, as have many other authors. It seems a classic case of catch 22. In order to promote, authors have to use social media, we connect with readers, build a following. Sometimes a connection will buy a new book, sometimes they will volunteer to review in exchange for a free copy. Amazon then decide to delete the review... because the author knows the reviewer???
How can we possibly win?
So please buy my book, and if you enjoy it write a review... but for heavens sake, don't add me on twitter or facebook, because if Amazon find out... you are likely to get deleted!

Here is the review, I managed to copy it from Scribd where it is actually still live.

Disclaimer: I was given a free electronic edition of this book in exchange for an honest and unbiased review.

Sleepwalker is not the type of book that I would usually select, and the first few chapters led me to believe that I wouldn't be rating it very highly – and then suddenly BANG, the plot twists began as more diverse characters entered the story. From that moment on it became a well crafted and suspenseful who-dunnit, and that uncertainty is carried right through to the very last page.
Basically, without giving too much away, Sleepwalker is the story of Debbie Grant, a wilful teenager, away from her protective father for the first time, and like most eighteen year olds alone on Spain's Coast de Sol, she's going a little crazy. Until she suddenly discovers that, unaware, she leaves her bed in the middle of the night... and sleepwalks.
She is also unaware that her nocturnal wanderings have made her the obsession of a psychopath. A man determined that she will belong to him, and him alone.
And so begins a sinister game of cat and mouse, as a cold and calculating serial killer stalks the pretty blonde, violently eliminating threats and competition, only a Captain of the Guardia Civil stands between her and the menace, a man old enough to be her father... but the man that she has become determined is her soul mate as she unwittingly sets up the final showdown.

Difficult to pinpoint the exact genre, this book is a wonderful mix of romance, suspense and police procedural, a gripping psychological thriller.


Pre-order. Due out end of April – beginning of May.

Another psychological thriller. Set in the heart of the Amazon Rainforest this book explores a nightmare scenario... what would happen if a weapon that all feared to use fell into the hands of fanatics. Terrorists that believe that the power of prayer will protect them from the apocalypse that they are about to release. 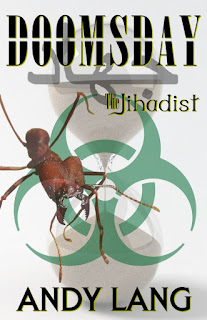 The consequences of its release would be too horrific!
A biological weapon so devastating that not even the most deranged would ever consider using it. Or so the security agencies hope.
But what if the deranged are also deluded, believing that prayer is protection enough against a pathogen that kills everything in its path.
One such believer is The Jihadist, and he will stop at nothing to win his holy war.

And so the story races from the deep jungles of Brazil to the bustle of Tokyo, from icy Denmark to the heat and dust of Yemen.

Fate has chosen two men to oppose the Jihadist and expose his network, and for the sake of mankind – They must not fail.

Rise of the Kressa

The Red Trade has been reduced to only 99 cents (or currency equivalent) and is available at this low price from Amazon, iTunes, Barnes & Noble, Kobo, Scribd, Lulu etc. 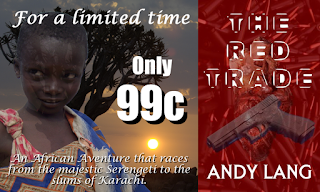 View it on Amazon
Posted by Unknown at 02:15