Numbers 2 and 3 in my Human Trafficking Series are on

A disturbing story of human trafficking that reveals hidden truths that many wish to deny exist.
Anita is a happy and healthy girl, but she has a problem, something that sets her aside from her peers, an inescapable condition. Anita is white, yet her heart and blood are pure African.
Anita is albino. A cursed child; an abomination.
Junior and Uncle are happy, carefree twins. Mischievous boys, full of life, pranks and optimism.
Natasha is a happy go lucky schoolgirl without a care in the world.
But they all share one thing in common. They are targets for The Red Trade, and a criminal gang is operating in their small corner of Africa. And customers around the world eagerly await.
Fortunately there are people willing to stand up and shout, “Enough is enough.” Glenn Ridgely is one such man, and with the help of his street-wise Kenyan girlfriend Ruth, and world weary Kalenjin police officer, Morgan. He sets about dismantling their sinister and sordid empire.
The Red Trade - A story that ranges from the IDP camps of northern Uganda to the wide, majestic plains of the Serengeti, and far across the Indian Ocean to distant Pakistan. A tale of abuse, subjugation, cruelty and superstition, morality, and finally hope and redemption. 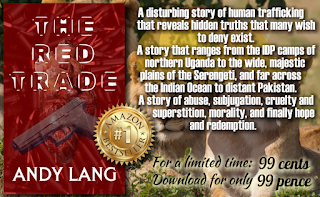 In 1787, whilst being held prisoner in the Bastille, Marquis Donatien Alphonse François de Sade wrote a novella entitled Les infortunes de la vertu. In 1791 the enhanced edition was published with the title Justine ou Les Malheurs de la vertu, or in English - Justine, or The Misfortunes of Virtue. This was his first published work, and on the instruction of Napoleon Bonaparte, Justine ensured that he spent the remaining 13 years of his life in prison, seemingly the book sickened the stomach as easily back then as it does today!

Let us jump forward just over 200 years and meet Earl Marcus de Silverleigh, a dot com billionaire and devotee of the Marquis and his writings.
A man of unspeakable depravity, and with the wealth to indulge even the wildest of fantasies. A man determined to re-enact de Sades sadistic masterpiece. A man driven to transpose Justine from fantasy to reality.
He simply needs to find her... and money is no object.

Theresa Vasilev is unfortunate enough to fit his vision of Justine perfectly, she is innocent, beautiful and God fearing... who better to suffer the ultimate torment. Stolen from her home in Sofia, Bulgaria, she is delivered into sexual abuse and slavery as Marcus grooms and shapes her to play the role he has cast for her.
Only one man can save her, and they have never met. Can Adam (Mr Average) Hurst stand up the Earl and dream of victory? Can Theresa survive the horrors and torture that Marcus has planed for her? Will wealth and power prove mightier that law and justice?
Find out in Finding Justine – Libertine.

Disclaimer: This work is based upon the writings of The Marquis de Sade, and although it should not be considered as erotica, scenes of sexual sadism and torture are described.. reader discretion is advised.
Not suitable for under 18's