The Crash – and updates.

One of the greatest frustrations in a digital age, the computer crash.

With trust and faith we rely on the computer that has become such a dominant feature in our lives, reliable and familiar. Every day it starts, boots, gives us access to the internet, to information, gossip, social networking. (Even work, for some!)

Yes... my computer crashed. No dark and dubious exploration necessary, no suspicious e-mail attachments opened, no warning from anti-virus software.
Eventually, it came from an innocuous little script, my internet access software. One small glitch in a well-known and very Orange coloured suppliers software trashed my operating system, leaving my poor over-worked laptop constantly searching for a modem that did not exist, refusing every other function.

Specialists and tech guys shook their heads, “Very strange, but it's not our software... that's impossible.” Words spoken as messages pop up on my screen before their eyes declaring “I know who did this to me.” naming and shaming the culprit .exe files.
“Impossible,” grudgingly changes to “Unlikely.” But still no open admission.

Their advice to me. “Go away and bother someone who cares.”

Oh how I would love to openly name people, disinterested and offhand individuals who allegedly work in Customer (don't) Care departments... but the fact of the matter is, they simply don't care, and what is the loss of one customer from a list of millions?
So I bit my tongue, and once again bent over and took what was coming to me for expecting any company in East Africa to be concerned about customer satisfaction, and paid for the privilege of rectifying their problems. (Problems that I have since learned are very common with this supplier.)

Now, yes, fortunately I had backed up what is most important to me, my book files and works in progress safely stored on my google drive... safe and secure one might think. Think again!

A new operating system is obviously seen as a new location by google. “You are signing in from a new location... prove who you are?” This message appears after I have entered the correct password three times and been rejected.

The first question to prove my identity... give the day, month and year that you opened the e-mail account.
Seriously, I ask you, who knows that for sure? Maybe I opened in in 2012, or was it 2010... hang on, was it 2000? Difficult enough to remember the year, especially when you have multiple accounts, but to ask for the day, and month????

Before anyone comments about the recovery phone number... Mea Culpa, I hold up my hands, I did mean to change that old and long dead number - tomorrow!

But the point that I am attempting to make; we all want security surrounding our e-mail accounts, but surely there is a better way than insisting that we answer questions that only the most hyper organised would know. (For those that watch The Big Bang Theory, Sheldon is the guy who would know that information... but then again, how many of us are like Sheldon Cooper?)
What happened to the security questions that I answered upon sign-up? What happened to the recovery e-mail address that I had to supply?

So now I have a working computer again, it took the better part of a week, issues abound, I still have problems logging into some sites, plus a Brazilian keyboard fighting against English software constantly giving me â rather than ? But who am I to complain, I'm up and running again despite the best efforts of my new Orange arch enemies!!

But my real message behind the complaints and moaning:


I would like to say thank you to all of those people who have been buying Gondell's Quest – Destiny on the iBookstore, (Kindle users... take a hint lol) and I appreciate the very positive comments. Part 2 is in progress, but still a few months away... please be patient!

LuluPublishing are doing a wonderful distribution job, with my books now being available worldwide, so many new distributors. But there are also very many fake sites offering free pdf copies of my books, some are even boasting that they have the audio editions to download. I would be interested to get those myself... considering the audio books don't exist yet!

Traffik:The Stolen Girls is still maintaining a grip on the top 100 on AmazonUK, despite still being in the wrong genre, but since it found itself shifted into Romance it hovers around #70 to #100, before, in Men's Adventure it maintained a consistent #4 to #25.
But 10 straight months as a bestseller isn't bad.

TheFountain of Saba has just returned to it's more usual price of $2.99. Because of my crash I wasn't able to post many messages or let anyone know about the 7 day – 99c/99p promotion, but even without my attention it almost made the bestseller list in the UK. The second edition is publishing now, punctuation and a few typos fixed.

Peninah's Passion is due to be offered on Amazon Countdown from the 12th until the 18th of November, on Amazon US and Amazon UK. 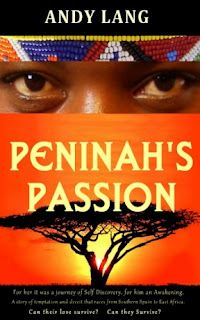 For her, it was a journey of self-discovery.

For him, an awakening.


Alex Longdon is a disgraced financial advisor. After his comfortable life has shattered to pieces, the only reason he has to continue is his young and beautiful Kenyan wife, Peninah.

Pursued by a cartel bent on their elimination and running from a dangerous knowledge, they find themselves chased across two continents facing mortal danger, deceit and temptation. For Peninah this is the beginning of a journey of self-discovery, as she slowly begins to understand her own desires and fetishes. For Alex, the journey is an awakening as he begins to understand his wife’s deepest needs.

Maybe they can save their love... but can they save themselves?

Note: This book contains a level of adult content and language.

FindingJustine – Libertine is progressing well, over 65k words so far. This novel is the third in my Human Trafficking series, following Traffik and The Red Trade. Admittedly, this is a much darker novel, and at the moment I really am struggling to find a happy ending. My original intention had been to explore the fate of an innocent girl dragged into a life of degradation by a sadistic Master. The mention of sadism eventually led me to The Marquis de Sade, arguably the worlds most famous sadist.
Not being a reader of erotica, I found Justine – A Virtue Well Chastised to be extremely disturbing, depraved and rather repetitive. But it had the effect of influencing the plot of my own work, taking me down a sinister path.
The work began life with the working title Jaded. The main protagonist being Jade, trapped by a cruel Master, finally freed by her boyfriend after tracking her half way around the world, bad guy ends up in prison, Jade and boyfriend live happily ever after! I am not going to give the plot away, but Jade became Theresa, a girl forced to become Justine, and if anyone lives happily ever after? In a few weeks, I should know the answer!