A snippet from Tokoloshe

Soon to be published in Kindle format. Available now as a paperback.

From my novel Tokoloshe. 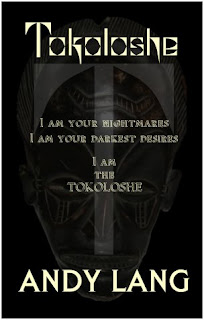 His low growl; barely audible, just a rumble deep inside his broad chest, he was hungry... starving he understood. Yet despite the tightness and pain he felt in his stomach he was wary, beyond wary, he was afraid.
This was a prey that he had never dared to stalk before, and his instincts told him to run, every one of his kind had a natural fear of the clumsy and noisy creature that he watched now through deep and intense yellow eyes. Yet it was not hunger alone that forced him to begin the stealthy stalk, one cautious step at a time, deliberate and poised, no sound of stirring leaf would come from his experienced paws. There was another force, invisible yet consuming that drove the leopard forward.
It wasn't a force that registered on a conscious level, it was more a compulsion, an urging inside his mind, true, he was afraid but his will grew stronger as he began to salivate in anticipation of the meal to come. The pain in his old joints surfaced as he froze, one paw hovering above the deep humus and dry leaves that formed a thick bed under the trees. His prey; wary, disturbed, he saw the creature pause, staring around with wide eyes, the same look of alertness that he had seen in the eyes of countless other animals, time would tell he knew, wait patiently, move not one whisker, ignore the pain that increased with age. Some would flee, bounding away with startling speed, those he would forget instantly and renew his search, but others would relax, he would see the tension leave their bodies, they would continue to feed. Those were the prey he would savour, his hunger satiated on their warm flesh. This creature returned to its wandering. So noisy, it's lack of stealth unnerved him, only a creature without fear would signal its location to predators so carelessly, yet the will that drove him sharpened his focus and drove away the trepidation.

Almost as a being carved in stone he waited motionless, his breathing less than a whisper, his eyes narrowed, focussed, intense. One step closer it came, he caught the scent again, his primal alarms sounded and for a second his body screamed flee, yet the will held him firm and resolute, his fear dissolving as he rumbled softly, a sound that came from deep in his belly rippling up to escape as a vicious snarl as he pounced.
The creature screamed, a high pitched sound that assaulted his sensitive ears, yet it was pathetically slow, it turned as he sprung from the cover of the bushes but within one of it's bounds he had borne it to the forest floor. It's struggle; feeble, why had he held it in his nightmares for so long? Even more helpless than the docile cattle and goats that he had taken so often since his age had slowed his tired body.
His own instincts controlled him now, the strange influence had disappeared, now he acted as he had countless times before, he felt the fragile windpipe begin to collapse under the crushing power of his jaws as he frantically raked the ragged claws on his hind paws repeatedly down the soft stomach, the screams dwindled to a strained gurgling, the creatures fluids seeped from the rents that he had created, again he bit down on the neck, squeezing the breath and the life from the weakening prey, he felt the shudder, the last tortured gasp... it was done.

Cautiously he paused panting softly from his exertions and listened, now was his greatest risk, lion or hyena, they would rob him of his prize. Swiftly he grabbed the neck again and with monumental strength dragged the lifeless body to the foot of a tall tree, biting down hard he heard the bones breaking and with all of his power heaved the dead weight up, again and again he struggled to drag his meal to safety, his claws digging deep into the bark as he heaved and scrambled and climbed, urgently seeking a branch to hold his meal high above the heads of the robbers he anticipated would arrive quickly drawn by the scent of blood and ruptured bowel.
Finally he was safe, and panting heavily he dropped the limp body into the crook formed by a solid branch where it grew out from the trunk, he scented the forbidden creature before rasping a rough tongue across the dark brown skin, tasting the salt of sweat mixed with the sweet copper tang of fresh blood, secure and confident... he began to feed.

In the shadows a cold malice also feasted, it feasted on emotions, the deep satisfaction that it sensed inside the big cat.
“It has tasted man now,” it chuckled, “It knows how fragile and helpless they truly are, it has replaced fear and respect with hunger and desire.”

The Tokoloshe chuckled and delighted in his own ingenuity, this would be a perfect way to clear a path to the female that Douglas so deeply desired.
Posted by Unknown at 10:48